Evangeline Yoder was first introduced to the physical therapy profession as a child while being treated by an orthopaedic surgeon in Richmond named Dr. Thomas Wheeldon. Yoder had adolescent idiopathic scoliosis – an abnormal curvature of the spine that appears in late childhood or adolescence. Wheeldon received accreditation in 1931 from the American Physical Therapy Association (APTA) to establish the first physical therapy school “in the south” at Richmond Professional Institute, the forerunner of the Medical College of Virginia’s (MCV) physical therapy program. 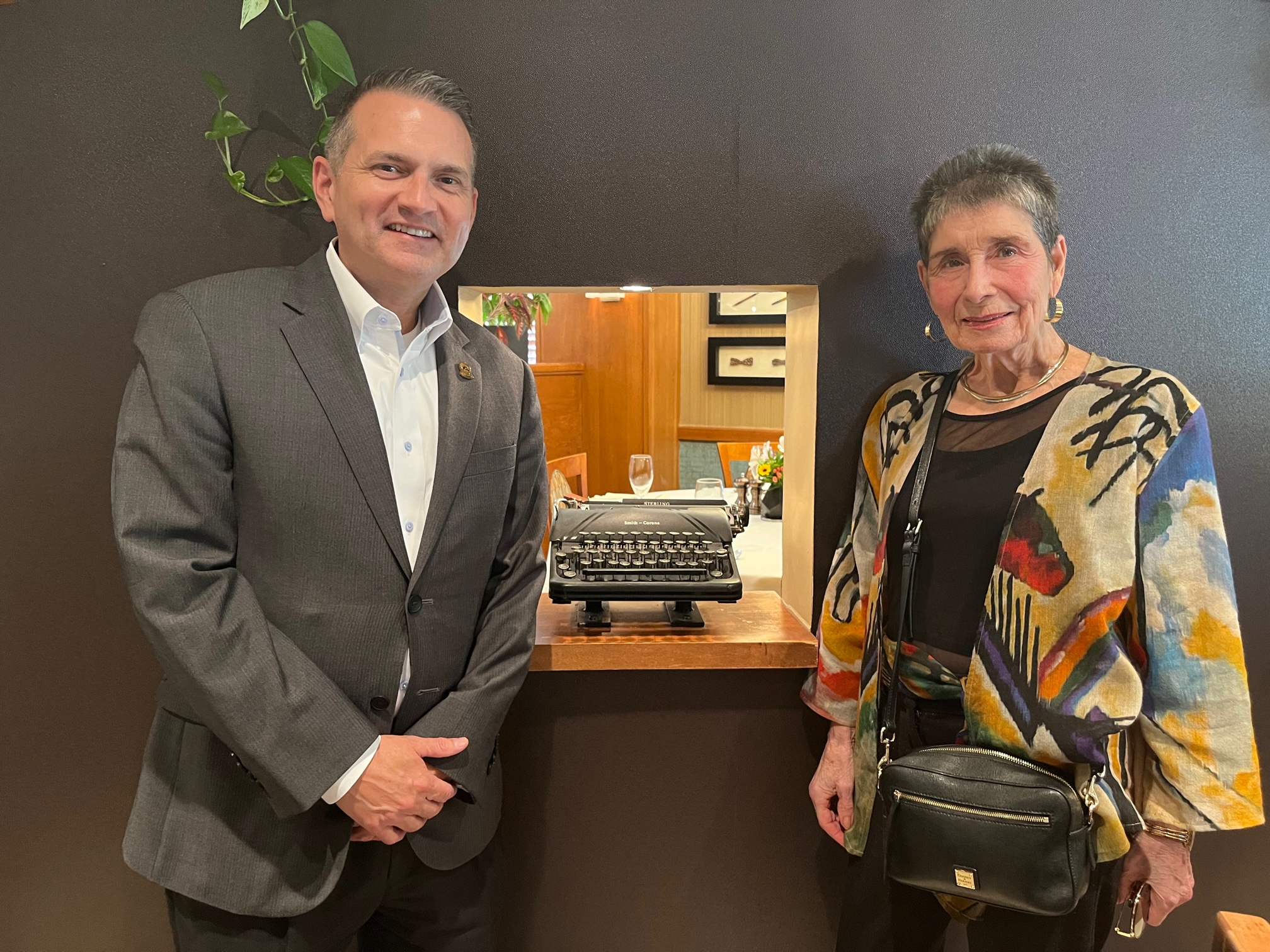 T. Greg Prince, senior director of development at the College of Health Professions and Evangeline Yoder, a 1962 graduate of VCU Physical Therapy.

She studied in the PT program and graduated from MCV in 1962 with a Bachelor of Science in Physical Therapy. The department chair during this time was Susanne Hirt, RPT, M.Ed.

“Miss Hirt developed and taught an intensely rigorous and demanding curriculum for aspiring therapists,” said Yoder, who also recalls the words of a 1953 graduate ‘she could put the fear of God in you with just one look.’”

Yoder began practicing at a rehabilitation center in Cleveland, and after a year, she traveled to England for experience in caring for patients with spinal cord injuries at the National Stoke Mandeville Spinal Injuries Center in Aylesbury, England. The center was founded in 1943 by Sir Ludwig Guttman – a medical pioneer in treating post WWII victims of spinal injury, and originator of the 1948 Paralympic Games.

With the practice of physical therapy expanding in the 1960’s to include neurophysiological approaches, Yoder took a post-graduate course in neurodevelopmental treatment in London, and a residency in proprioceptive neuromuscular facilitation in Vallejo, Ca. She also learned physiotherapy procedures for patients with vestibular disorders conceived by otoneurologist Sir Terrance Cawthorne.

Another area of Yoder’s training took place at the Bad Ragaz Medical Center – Medizinische Abteilung in the Swiss Alps. She acquired skills in aquatic therapy, while also learning German and skiing on the alpine slopes.

In the 1970’s physical therapy practice expanded in the USA to include orthopaedic manual therapy procedures. Yoder took courses with Dr. James Cyriax and Freddy Kaltenborn, PT, DO, followed by a certification course in spinal manipulation with Geoffrey Maitland, PT in Adelaide, Australia.

Yoder says these experiences proved to be invaluable during her more than 20 years of clinical practice, in a variety of settings, and later as a professor in academic settings.

“I especially treasure the enduring friendships forged with other globe-trotting physios,” she said. “To this day, we still commiserate about our golden years as therapists.”

Yoder spent the latter 20 years of her career as a teacher. She says she is especially grateful for the mentorship of Otto D. Payton, who was once chair of the MCV Physical Therapy Master’s program.

« Back to featured news